Drawing on what she herself refers to as a ‘huge book of music’ amassed, over the last 20 years, by her trio with partner Steve Swallow (bass) and Andy Sheppard (saxophones), pianist/composer Carla Bley played « one tune after another » in the studio, recording only the selections that producer Manfred Eicher wished to include on this album, which, courtesy of this process, functions as a sort of retrospective survey of past Bley work. 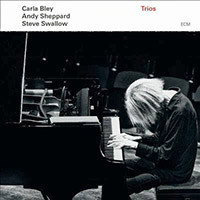 Even the running order surprised her : « … starting with ’Utviklingssang’ [’Development Song’], which we’d normally play after a few fast numbers, or as an encore » she calls one of his « wild ideas », but the resultant album, for which this « hushed, modal masterpiece » (Stereophile magazine), in all its elegant, deeply affecting, earnest simplicity, sets the tone, has been fashioned thereby into a quintessential ECM production (all previous Bley releases having appeared on JCOA and WATT) : considered, poised, assured, unshowy.

The rest of the programme, despite spanning over four decades of Bley’s compositional life (« Vashkar » first appeared on a Paul Bley album – also featuring Swallow – in 1963 ; « Les Trois Lagons », inspired by the work of Henri Matisse, in 1996 ; « Wildlife » and « The Girl Who Cried Champagne » in the mid-1980s), addressed as it is by three supremely sensitive, responsive musicians – Swallow nimbly picking out his uniquely deft and sonorous bass-guitar sound, Sheppard breathing intense warmth and humanity into everything he plays, Bley herself delicate and understated, yet subtly controlling the trio sound – is, as Bley suggests, « quite serious » and « rather nostalgic », yet none the less enjoyable for that, courtesy principally of the typically unfussy manner in which she approaches it : « We just play the music and take some solos. »