The centrepiece of this performance by Carla Bley, Steve Swallow and Andy Sheppard was a new composition by Bley : one of 21 enterprising commissions by Serious to mark the 21st anniversary of the London Jazz Festival. She explained that « Naked Bridges, Diving Brides » was also composed “with a little help from Felix Mendelssohn” to celebrate Sheppard’s recent marriage. The familiarity of extracts from the « Wedding March » contrasted sharply with the remainder of this work, which was complex and, on first hearing, pretty obscure. Its title, incidentally, comes from the opening phrase of the poem “Peking Widow” by Paul Haines, with whom Bley worked over 40 years ago. 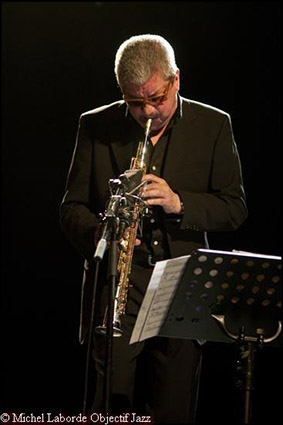 An hour before that, the concert began with Bley’s « Wildlife » trilogy, during which Sheppard produced astonishingly long lines via seamless (and apparently effortless) circular breathing on soprano saxophone. The next two tunes were arrangements of material originally written for larger ensembles in the 1980’s : the smoothly smouldering « Rut » (from the Night-Glo album) and « Valse Sinistre » (from Social Studies), which was more challenging. Everyone studiously followed the dots, and – for much of the show - this extremely close attention to detail was interrupted only by quick glances to confirm a down beat or cue a solo.

At the end of the first set came the only music not composed by Bley. The long, hypnotic, constantly-shifting line of Thelonious Monk’s « Misterioso » melted into a gorgeous stately blues that had Sheppard swaying with delight. The pianist’s arrangement gradually brought the piece to a logical and satisfying climax, without a recapitulation of the theme.

The transparent acoustic of Wigmore Hall and the rapt attention of the audience may have influenced the selections, not necessarily in a good way. Although Bley’s remarkable compositions are consistently ear-catching, the emphasis was on her mellower side. High volume and bombast would have been a mistake, for sure, but this trio can tear it up with the best of them and sometimes one wished for more brio alongside the tender ballads. Things did intensify after the new commission, as if the musicians were gearing up to run through a few of their greatest hits. Swallow’s focus and concentration paid off during a fast and bluesy « Awful Coffee », where the inimitable flow of his bass guitar drove the others on. « The Lord Is Listenin’ To Ya, Hallelujah ! » was a real crowd-pleaser, and its cheesy, hymn-like cadences brought smiles all round.

Superficially a gentle samba, « The Girl Who Cried Champagne » contained some of the most adventurous music, during which Sheppard’s supreme technique and unique tone came to the fore. Bley may be primarily a composer and arranger, but here she also displayed daring instrumental skill.

The trio returned to the stage for an encore, « Utviklingssang ». Swallow started with a simple motif, joined by Bley and then Sheppard. The tune slowly unfolded, and together they wound the concert to a typically peaceful conclusion.

Like the recent CD by this trio (ECM 2287) the gig was something of a career retrospective for Bley. It was impossible to do justice to her enormous body of work in one evening, but it was reassuring to know that she remains a vital composer and continues to lead one of the finest trios in jazz.