« I’m originally from France. I’ve lived in Paris for some years now, and yet, somehow, I have only ever made it to the UK three times. The first time won’t be forgotten.

I went on tour in a band led by the Catalan saxophonist Perico Sambeat, and organized by Michael Janisch a few years back. We had a great time, we played at the Pizza Express Jazz Club in London, and then on a UK tour which took us all the way up to Scotland.

Now, finally, I’m back. Once again Michael is presenting, but there are two big changes : this time it is in his own festival, and I am not a sideman, but will be presenting my own music for the first time in London. And so I am really looking forward to presenting my latest release Colorfield, at the first Whirlwind Festival at what looks like an amazing venue the Kings Place. I’m also very privileged to be sharing the bill with Robert Mitchell. I have never heard a solo album quite like The Glimpse. 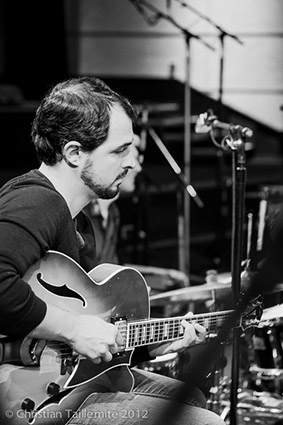 I recorded Colorfield eight months ago, in London (that was my second ever visit) with Janisch, Walter Smith III and Jamire Williams, and I’m thrilled to be back here to play it live for the first time. While writing the music of the record I’ve tried to keep it simple and singable, I’ve also tried to base it on actual feelings, people that have inspired me and of course what gave the album his title : an art movement from the 50’s, the « Colorfield » painting. « Man on a Wire » has been written for Philippe Petit, whom you might know from his walk on a wire between the Twin Towers, « Twombly » is dedicated to the painter Cy Twombly, « Three on Seven » is a variation of Wes Montgomery’s classic « Four on Six ».

For this concert I’ll be playing with three musicians for whom I have huge admiration :

- Michael Janisch, a bass player I met while studying at Berklee now over 10 years ago, he has a deep melodic approach and a strong groove/big tone. - Gautier Garrigue, a really creative and quick thinker, who despite his young age is one of the busiest drummers in Paris right now (this will be his very first visit to London). - And, for this concert I’ve also invited someone I’ve been a fan for years : Logan Richardson, an alto player who’s sound and unique concepts make him one of the most unique and in demand musician in the world, and I know this is said a lot about a lot of people, but in this case it is true !

I’m also honored to be featured on such an original festival, organized by an independent label totally dedicated to original jazz and improvised music. 18 bands in 3 days in such a beautiful venue as the Kings place is really something else - I hope people will come and support live music.

In Paris, I run the Paris Jazz Underground which I believe mirrors many of the same goals of Whirlwind Recordings. We find musicians who form the real backbone of the scene, but who may not otherwise get heard or released, and make their special music available through a professional set-up. »