Alto saxophonist/composer Tim Berne – always a perceptive commentator on his own work – identifies his current band’s most salient feature as « transparent density », which he admits sounds like an oxymoron, but which he justifies by (rightly) pointing out that « There’s a lot of contrapuntal writing and dynamic intensity to the music, a lot of sonic information – but presented with clarity. » 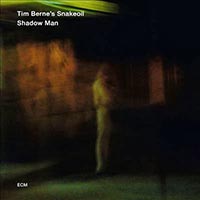 Berne may have risen to prominence courtesy of a somewhat abrasive, even punkish, approach to music-making, but he has always given scrupulous attention to nuances of texture and subtleties of group interaction, so his Snakeoil quartet has found a natural home on ECM. « [H]ungry for new music … playing with real abandon » is Berne’s description of this band : the restlessly inventive, roilingly intense pianist Matt Mitchell, the master of texture and time Chess Smith (who plays drums, congas, vibes and gongs as required), and the pungently original clarinettist Oscar Noriega.

On this, the band’s second album for the label, Berne has provided this brawlingly vigorous but miraculously responsive ensemble with five pieces (and a short Paul Motian composition, « Psalm ») that, by constantly moving between chattering improvisational freedom and relatively tight structure, enable the quartet simultaneously to play ‘with real abandon’ (Berne’s words) and extraordinary mutual sensitivity – like all Berne’s music, this is full-on, rumbustiously interactive and utterly compelling ; it is also carefully balanced, thoughtful and considered, Berne himself noting : « I like to take advantage of the fact that I’m speaking to an audience that really wants to listen to music. »