"2008 was a good year for French bass master Joëlle Léandre : a biographical book À voix basse, assembling her talks with journalist and producer Franck Medioni ; excellent discs, with bass comrade Barre Phillips A l’improviste (Kadima Collective), with reed player Akosh S. KOR (Leo), her Stone Quartet (DMG) ; and a recent documentation of her 2007 tour in Israel — Live In Israel (Kadima Collective). And now this remarkable documentary film, a full 140 minutes, packaged with a beautiful booklet of paintings by Leandre and haiku-like poetry by Swiss writer Jean-Noël von der Weid dedicated to her art. (Samples : The dialectic of the swing : / Impregnable lips counterpoint / budding brambles and There are no flamingos pinker than / at the edge of the wounds torn by nails.) 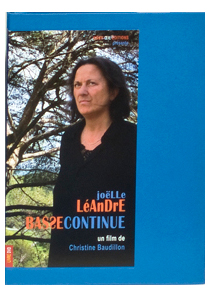 Directed by Christine Baudillon, and shot by her and François Lagarde, the documentary follows Leandre during the past two years — at in her home in Paris and country home in South France, her residence at Mills College in California, various musical meetings throughout France and Belgium and her tour in Israel. The articulate and passionate Leandre shares her passion and her uncompromising conviction on behalf of her art—and commitment to free improvisation — in a series of anecdotes, interviews and daily chats with friends and associates. She speaks about the formative influence of iconoclastic free-thinkers and composers such as John Cage and Giacinto Scelci, the exemplary role of Derek Bailey, and the egalitarian and urgent character of genuinely free improvisation. She is seen and heard while discussing its burning passion, the never-ending, chaotic and serendipitous manner of finding one’s way, the need to look and be open for the unknown, and the scarcity of like-minded musicians (even this writer was captured in a brief scene, attempting to compare the state of mind of the free improviser as described by the artist with the Buddhist notion of emptiness). As a kind of summary of her art, he states : « improvisation is life. »

The musical meetings capture her versatility, attentiveness and the resourceful ways she uses to push her students and sometimes musical partners from their « comfort zone. » These meetings feature her in a truly magnificent duet with Anthony Braxton on the alto sax, from a 2007 recording session ; inventive and funny duets with guitarist Fred Frith, violin player India Cooke and Barre Phillips ; provocative and inspired musical performances with vocalist Lauren Newton and trombone player George Lewis ; the solo performance of a Cage composition (« A flower ») and other improvisations, including a folky-swinging meeting with reed player Akosh S. and her European quintet performing a chamber jazz free-form suite. Finally, the film captures her in performance in Israel with bass player Jean Claude Jones, reed player Steve Horenstein, oud player Sammer Makhoul and in solo recital in Palestinian Ramallah.

Baudillon presents a loving and clever portrayal of Leandre as an artist who commands the viewer’s full attention, touching the spectator personally and deeply. Léandre, even when she declares that she carries no messages in her improvisations, nevertheless offers wise and often humorous performances that call for an active involvement on the part of the listener, transmitting to him or her the importance of refusing to be complacent about their world, whether it be the artistic, the social or the political realm. Throughout, the film shows Leandre as always ready to examine, challenge, and ultimately change common conventions. The documentary amounts to a tour-de-force as an overview of this unique musician." (D.R.)

By Eyal Hareuveni (All About Jazz)